What if I get bitten?

Don't panic! Not all bites result in venom being injected. One quarter of all rattlesnake bites are "dry" bites.
Stay calm and reduce movement.
Clean the wound - wash with soap and water
Remove jewelry on the affected limb.
Call emergency services (911) and get to a hospital as quickly and safely as possible.
DO NOT apply ice or a tourniquet.
DO NOT cut or apply suction to the bite area.

How can I avoid snakebite?

Do not pick up snakes or other wild animals. This is the most common cause of snakebites.
Do not harass, chase or threaten a snake, the second most common cause of snakebites. It is illegal due to the snakes protected status.
Stay on the beaten path when walking in rattlesnake habitat and use a flashlight at night.
Always wear ankle-height, close-toed boots or shoes when hiking. The Massasauga has relatively small fangs that are not likely to penetrate leather-hiking boots or loose clothing.
Always watch where you put your hands and feet. Do not reach into areas where you cannot see.
If you hear a rattlesnake, stop moving and determine the snakes location. Slowly step away and give the snake room to move away.
Protect your pets - keep dogs on a leash when walking though rattlesnake habitat. 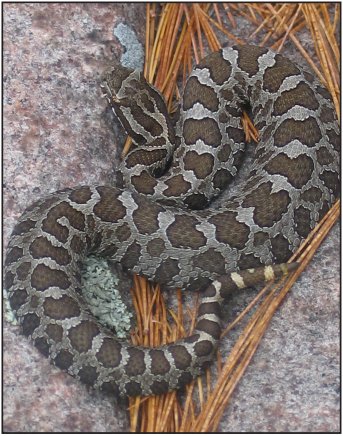 The federal Species at Risk Act, and the provincial Endangered Species Act have designated the Eastern Massasauga Rattlesnake as a Threatened species. This designation legally protects the Massasauga from being harassed, captured, killed, bought, or sold. A violation of either Act can result in a maximum fine of $250,000 and/or

imprisonment for up to one year. A violation for commercial purposes increases the penalty to a maximum fine
of $1,000,000.

Please see the documents attached below.